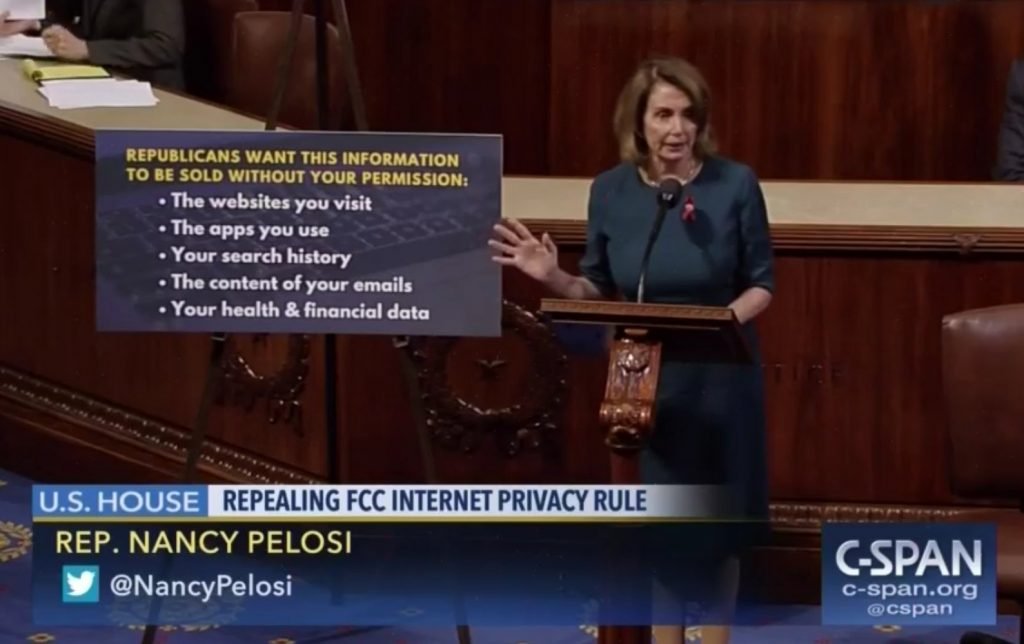 Republicans in Congress faced a growing backlash after voting to repeal an FCC rule that would have prohibited internet service providers from selling customers’ personal data such as their browsing history.

The House of Representatives voted to repeal the FCC rules on March 28, following Senate approval March 23. If President Trump signs the legislation as expected, ISPs will be free to monitor customers’ behavior online and sell that information to advertisers.

The FCC rules, which had not yet taken effect, would have created a requirement that internet service providers ask customers for permission before selling sensitive customer data such as browsing history. The rules also would have required ISPs to take reasonable measures to protect consumers’ data, and inform them if it was compromised.

Democrats opposed the resolution, saying that repealing the FCC rules was a direct attack on consumers’ rights and privacy.

“The American people did not ask for this resolution,” said Rep. Mike Doyle (D-Penn.) during the debate on the House floor. “In fact, no company will even put its name behind this effort. Instead, this resolution is the result of an explicit written request from Washington lobbyists.”

Republicans said they were rolling back unnecessary regulations that would harm the economy.

“These broadband privacy rules are unnecessary and are just another example of big government overreach,” said Rep. Marsha Blackburn (R-Tenn.), a sponsor of the resolution. “Since President Trump took office, Republicans have been working diligently to loosen the regulatory environment that is suffocating hard-working taxpayers.”

While the party line vote may have been unsurprising, Republicans have faced growing anger from consumers, and even members of their own conservative base. Critics pointed out that there appears to be no consumer support for the resolution, and many of the lawmakers who voted for it had accepted large donations from the telecommunications industry.

Laila Abdelaziz, a campaigner with the nonprofit Fight for the Future, said the resolution was “just the latest attack on our basic right to privacy and our ability to use the internet safely.” She said the organization had launched an online resource at www.letsgetsafe.org to help consumers protect their privacy online.

“This move to eliminate these rules makes it clear that Congress values big industry more than consumers,” said Katie McInnis, staff attorney for Consumers Union, the policy arm of Consumer Reports. The organization said that it had heard from more than 50,000 consumers who support strong online privacy protections.

House Minority Leader Nancy Pelosi (D-Calif.) sent a letter to major internet service providers, asking them to state their position on the legislation. AT&T published a blog post stating that the action by Congress was “commendable” and “had zero effect on the privacy protections afforded to consumers.” Verizon stated that “what Congress voted for this week” was “one consistent consumer privacy framework” that would benefit consumers. Comcast said in a statement that there has been “a lot of misleading talk” about the action by Congress “to overturn the regulatory overreach of the prior FCC.” Comcast said that it “is just not true” that Congress’ action would permit the company to “sell sensitive customer data without customers’ knowledge or consent.”

Senate Minority Leader Chuck Schumer (D-NY) and 46 other Democrats in the Senate signed a letter to President Trump, urging him to veto the bill and “tell us whose side he’s really on.”

State lawmakers are taking their own action on data privacy. The Minnesota state legislature approved a measure prohibiting ISPs in the state from collecting customer data without permission, and Illinois lawmakers are considering a bill that would give consumers the right to find out what information is collected on them by companies like Facebook and Google. Such “right to know” laws are already in place in Europe.

Public outrage has spawned creative tactics in counteracting the repeal of the FCC rule. Several activists suggested buying and publishing the browsing history of members of Congress. However, revealing “individually identifiable” consumer information is already prohibited by law.

Fight for the Future said it would buy billboards featuring the names of members of Congress who voted for the measure, with the accompanying message: “They betrayed you.”

Late night talk show host Stephen Colbert said of the Congressional action, “I guarantee you there’s not one person, not one voter of any political stripe anywhere in America, who asked for this.”

Even many readers of the conservative Breitbart News opposed the resolution. The top-rated comment on the site’s report on the legislation read, “This is one of very few Obama-era regulations that should have stayed.”