Google Algorithm Update Wipes 53% of Law Firms Off the Map

For a law firm, being in the 3-pack (top 3 rankings in the map on the search results page) for your specific practice area’s keywords is the holy grail in search marketing. Achieving the map position requires a combination of onsite quality, offsite metrics, and Google’s local algorithm. Being on top can determine whether your law firm is found but also, whether word of mouth referrals see your high ratings and reviews.

Google is constantly tweaking their algorithms to find a way to exhibit the best user experience possible. These adjustments can and will affect the way your firm is ranking and most marketers and businesses that engage in search marketing practices have come to expect moderate turbulence. However, the past month has been an abnormally tumultuous time for law firms ranking on the local map on Google.

In May, I built an index of 195 websites that were ranking in the top 3 (3-pack) in various cities and practice areas. This week on the heels of a shaky September and the Google Penguin 4.0 release, I ran the test again and saw significantly different results.

An astounding 52.8% of law firms previously in the 3-pack have disappeared.

Google Possum
This algorithm update seems to primarily affect local search. The SEO community has decided to call this algorithm “Possum”, possibly due to the fact that local business listings seemingly disappeared from the local map. Fear not, your listings have not been erased, just filtered.

The specifics of this update are still unclear, but some changes have been defined. Some businesses that fall out of the physical city limits have had their rankings increased. Google now believes that a high quality website with solid metrics and an office a few miles out of city limits can now compete with the downtown law firms. This change has helped some suburban law firms qualify for a metro keyword. Search results also differ more based on various keyphrase formats. Prior to Possum, “Houston Personal Injury Attorney” and “Personal Injury Attorney in Houston” would generally yield the same results. It seems now that this has changed. 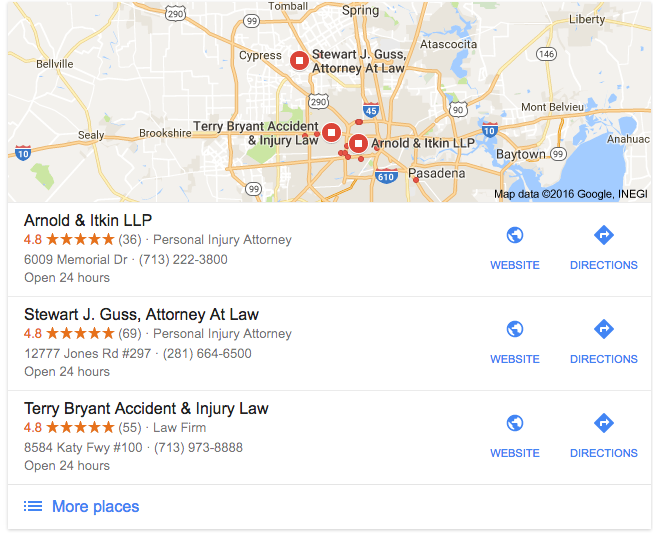 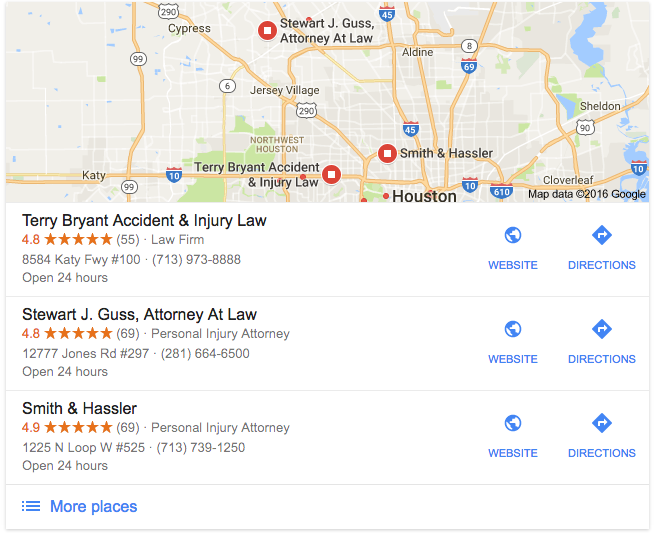 Another major algorithm update that could be related to the changes to local search is Penguin 4.0. It was officially confirmed on September 23. Penguin 4.0 is a big deal among search marketers because it is formally integrated into Google’s core algorithm – meaning Google will never announce another Penguin-related update again and the functions of Penguin will be in real-time.

Local Map Search Experiment
When I first compiled the list of top local law firms, I had no idea that it would be the last time I’d see some of them. In order to compile this catalog, I chose the five cities with the highest population – New York City, Los Angeles, Chicago, Houston and Philadelphia. I also chose eight other cities – Miami, Cleveland, San Francisco, Phoenix, Dallas, Atlanta, Oakland and Seattle to see if the algorithm would affect them as much as the highest populated cities. I then picked competitive areas of practice such as Personal Injury, Bankruptcy, Estate Planning, DUI and Divorce. Lawyer and Attorney were alternated for each search. I composed the top 3 law firms shown on the local map, bringing the total to 195 law firms. 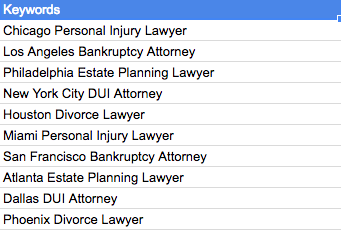 When the turbulence of local rank changes began forming, I immediately rebooted this experiment to see how severe the adjustment would be. To my surprise, 103, or 52.8% of law firms previously ranked in the top 3 of the local map were no longer there. This signified that it wasn’t just a regular correction Google made, this is an update that is changing the landscape of local search.

By following these guidelines, your law firm can create excellent quality page titles to help it rank in search.

Stay to speed on the changing legal landscape by understanding how your competitors stay relevant.

Are You Paying Enough for Your Marketing?