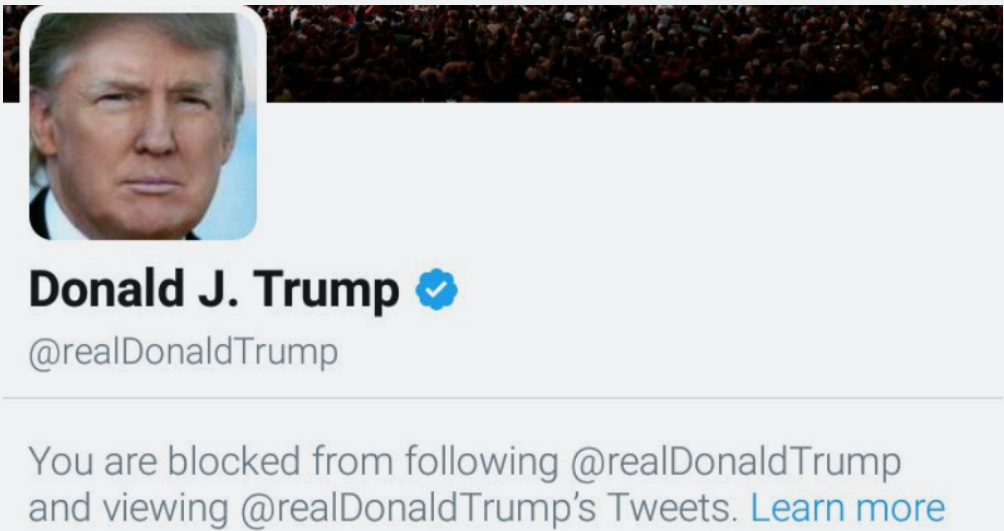 A group of Twitter users who have been blocked from the @realDonaldTrump account are suing the president and two White House aides, arguing that their inability to engage directly on the social media platform is a violation of their First Amendment rights.

The Knight First Amendment Institute at Columbia University filed the lawsuit on behalf of seven Twitter users who claim they were blocked because they criticized or mocked President Trump on Twitter.

Lawyers for the plaintiffs claim the president cannot ban people from an account that functions as a designated public forum simply because they have expressed views with which he disagrees.

The lawsuit states that Trump's actions impose an unconstitutional restriction on the plaintiffs' access to official statements. Being blocked also prevents them from petitioning for a “redress of grievances.” The Knight First Amendment Institute joined the suit, arguing it has a right to be exposed to the perspectives of those who are unable to speak within the forum.

Plaintiffs are asking for an injunction requiring Trump to unblock their accounts and enjoining him from blocking future followers, and for a declaration that the original action of banning select users was unconstitutional.

The claim that Trump's actions were unconstitutional hinges on the assertion that the @realDonaldTrump Twitter account operates as a designated public forum, a space allocated by the government for people to come to voice their opinions. In a designated public forum, speech restrictions are subject to strict scrutiny, and viewpoint-based speech is protected by the First Amendment.

The suit was foreshadowed in June when the free-speech institute sent a letter to Trump, asking him to unblock two Twitter users, now-plaintiffs, on the basis that banning those who disagree with him is an unconstitutional suppression of dissent.

"Though the architects of the Constitution surely didn’t contemplate presidential Twitter accounts, they understood that the President must not be allowed to banish views from public discourse simply because he finds them objectionable," Knight Institute executive director, Jameel Jaffer said at the time the letter was sent. "Having opened this forum to all comers, the President can’t exclude people from it merely because he dislikes what they’re saying."

The release of the letter sparked a debate among lawyers and scholars, some critical of the plaintiffs' arguments and some contending they are likely to prevail. Those critical of the lawsuit voice several objections, including that the @realDonaldTrump account is personal not official and that the plaintiffs have suffered only minor injury since they can still see Trump's tweets if they are not logged in to their accounts. Skeptics also argue that Twitter is a private company with its own set of rules, and Trump is operating within the terms of service.

“The First Amendment only covers government action, and Twitter is a privately owned platform and not a public forum like a public sidewalk or public university,” attorney Matt Pinsker, a constitutional law scholar and Adjunct Professor at Virginia Commonwealth University told BLF. “There is no way that a platform owned by a private corporation can be designated a public forum; and declaring it such would violate the rights of the business.”

In a statement released after the lawsuit was filed, Alex Abdo, a Knight Institute staff attorney, challenged the idea that Twitter's status as a private corporation is legally determinative. In some cases, he said, privately owned spaces like community centers and theaters can become designated public forums for the purpose of meetings.

“The fact that the President is speaking through Twitter is unlikely to be controlling. Twitter is just his vehicle for communicating his words,” attorney James Goodnow told BLF.

“If it were true that anytime a privately owned company was involved you couldn't have government action, it could create the bizarre outcome where presidents could shield themselves from the First Amendment by simply involving privately owned corporations in the communications process,” he said.

Some of the disagreement stems from the fact that public forum doctrine is far from settled. Laws safeguarding activity in public areas were originally intended to protect protesters gathered in parks or on public streets. The Supreme Court has expanded this definition to include some meeting spaces, like libraries, where speech is subject to the “time, place, and manner” regulation.

Restriction on speech in designated public forums is intended to minimize disruption by preventing street closures at rush hour or loud demonstrations in the middle of the night. Such precedent does not apply neatly to online activity.

Two weeks after the Knight Institute sent its letter to President Trump, the Supreme Court unanimously struck down a North Carolina law prohibiting registered sex offenders from using social media sites that allow minors to be members. North Carolina argued that the law was an extension of similar restrictions that prevent sex offenders from being at schools or on playgrounds. The Supreme Court disagreed, saying the law violated the defendant's First Amendment rights.

Justice Anthony Kennedy, writing for the majority, said, "North Carolina with one broad stroke bars access to what for many are the principal sources for knowing current events, checking ads for employment, speaking and listening in the modern public square,” Kennedy continued, “These websites can provide perhaps the most powerful mechanisms available to a private citizen to make his or her voice heard.”

Abdo and others also cite Davison v. Loudoun County, a 2016 case in which a federal district court held that a Facebook page may become a limited public forum despite Facebook's status as a privately owned company.

Distinguishing between government and private speech will also be key to the outcome of the case. Trump used the @realDonaldTrump Twitter account before becoming president. Since becoming president, Trump also tweets occasionally under the official @POTUS account and @WhiteHouse handles.

If Trump's actions when using the @realDonaldTrump account are considered the actions of a private citizen, then his followers have no protections under the First Amendment; constitutional rights apply only against the government.

Eugene Volokh, who teaches for the UCLA School of Law, says he is inclined to believe Trump's account is personal. Writing for the Washington Post, Volokh said, “My sense is that the @realDonaldTrump account — though run by Trump on government time and from government property — is the work of Trump-the-man (albeit a man to whom people pay attention because he is president), just as it was before November, and not Trump-the-president.”

The Knight Institute argues the president's actions prove the opposite. Trump uses the @realDonaldTrump account regularly to discuss policy and to release statements about official business, including the June 7 announcement of Christopher A. Wray's nomination as F.B.I. director and the June 22 denial of the existence of any “tapes” of conversations with former FBI Director James Comey.

The Ninth Circuit took this position in its ruling striking down the administration's travel ban, referring to Trump's tweets as official statements in its opinion.

The administration's own comments could be pertinent. Press secretary Sean Spicer said in a press briefing at the beginning of June that tweets are “considered official statements by the President of the United States.” Spicer did not limit that declaration only to the @POTUS handle, referring instead to the “110 million people across different platforms” that the president addresses through social media.

Goodnow believes that even if Spicer were referring only to the @POTUS Twitter account in his statement, the lawsuit still has merit. “Trump has elected to capitalize on the large number of followers on his personal handle to advance official policy positions,” said Goodnow.

As if to confirm this theory, Trump tweeted on July 1, “My use of social media is not Presidential — it’s MODERN DAY PRESIDENTIAL. Make America Great Again!”

My use of social media is not Presidential - it’s MODERN DAY PRESIDENTIAL. Make America Great Again!

If a Twitter profile or Facebook page can be a designated public forum and @realDonaldTrump is determined to be an official government account, it is still unclear whether the courts will believe the plaintiffs have suffered sufficient harm as a result of the bans. There are workarounds, some more complicated than others, that could allow those who have been banned to continue to engage with Trump on Twitter.

“The Constitution preserves and protects the right of the people to petition their government and the freedom of the press, but it does not protect any particular means of communication,” said Pinsker.

“Twitter is not a constitutional right, and even if a person is blocked on Twitter, that person is not suffering any deprivation of rights because that person still has countless other options to petition the government including mail, email, phone calls and many other options.”

According to the Knight Institute, these workarounds are “not constitutionally adequate alternatives.” When the president blocks dissenters, he is “manufacturing echo chambers.” This harms those who are blocked as well as those who cannot experience opposing viewpoints, and it distorts the public debate.

“The right to free speech is the cornerstone of our constitutional democracy,” said Goodnow. “What's happening is that when President Trump blocks users, he's disinviting them from the party; he's taking steps to prevent their opinions and voices from being heard.”

He continued, “The lawyers making the First Amendment case are advancing a creative, compelling constitutional case given the novelty of the situation. But creative arguments don't mean anything unless you have judges who accept them. And that's an open question here.”

Neil Richards, a professor at Washington University's Law school, believes the lawsuit has value regardless of the outcome. According to Richards, "What the Knight Institute is doing is a useful public service that starts an important conversation."