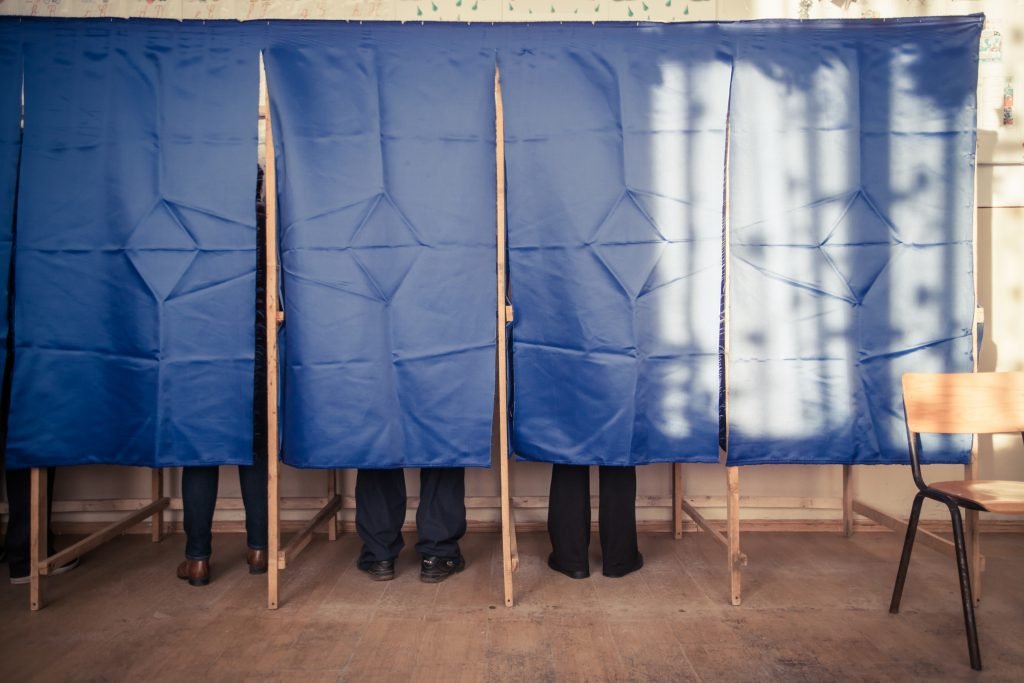 People vote in a voting booth at a polling station.

There is a fine line between free speech and voter intimidation to be discussed when it comes to wearing political “items” in or outside a polling station. According to the Minnesota Voters Alliance the law pertaining to what to wear when voting needs to be either redrawn or clarified.

Every state has a law creating a campaign-free buffer zone outside polling stations -- a practice upheld by the U.S. Supreme Court.

However, the Supreme Court Justices tackled a stricter law regulating political apparel inside the polling places in Minnesota. Currently, there is no indication one way or another on which direction the SCOTUS may be leaning.

The issue at hand is how much can free speech be limited? Where should the line be drawn when it comes to expression? Some view the display of partisan clothing and hardware, such as buttons, to be advocating for a candidate and/or party and may directly or indirectly pressure undecided voters at the polls.

Is Minnesota attempting to silence speech?

The case in question concerns Andrew Cilek, a Minnesota voter, who wore a “Please I.D. Me” button and a Tea Party T-shirt when he went to vote. He was asked to cover the shirt and remove the button. He left the polling station, without voting. On his third attempt at voting, he had an attorney in tow and was then allowed to vote. His name was taken down for future reference, but also because being in violation of the law could mean a $300 fine. The fine was not levied in this case – but – the potential for that to happen existed.

The Minnesota Voter’s Alliance and Cilek opted to sue because they have issues with a particular statute and the fact that they claim Cilek’s constitutional free speech rights (wearing a T-shirt and button) were violated. The statute states:

The plaintiff and the Minnesota Voters Alliance feel the voter has a right to wear the Tea Party t-shirt.

Says Justice Anthony Kennedy, a noted free speech advocate: “Where do we draw the line as to what is permissible?” A valid question indeed when the Court has repeatedly stated there must be solemnity and decorum in the voting place. Chief Justice John Roberts backed up Kennedy’s point-of-view about decorum at polling stations and warned about the possible “subtle psychological pressure” on other voters should a group of people wear the same shirt or button. Perhaps, he added, people should be able to vote “…in peace and quiet without being bombarded.”

This issue is without a doubt a broad and complex one, and that may also be the route that the Supreme Court takes when examining the issue closely – that the statute in question is too broad and lacks definition. But therein lies the difficulty of defining or refining such a statute, as it may be viewed as limiting speech at polling stations by possibly banishing it to the public sidewalk.

The defense attorney for the state of Minnesota, Daniel Rogan, argued that the limitation pertains to electoral choices at the polling station. An example would be if gun restrictions were on the ballot, then someone could not wear an NRA button. While a seemingly valid argument, Justice Ruth Bader Ginsburg wondered how far it should go and would a “Me Too” or ACLU be banned in Minnesota polling stations. Justice Elena Kagan also wondered about “Resist” or “Make American Great Again.”

Voting at the polls now is in no way what it used to be like in the early 1900s when voting was akin to a street brawl, both in and outside the polling places. Intimidation, voting the “right” way and having ballots torn out of people’s hands were common occurrences. With time order was implemented to the process of voting to protect those who voted. States passed laws to protect those who voted from harassment and intimidation. Soon after every state banned electioneering outside polling stations and followed up with more strict laws inside polling stations.

Minnesota has one of the strictest laws relating to campaign clothing/buttons – items with a political message. This is the law that Andrew Cilek and the Minnesota Voters Alliance want to change or have relaxed.

It appears there are, at this point in time, more questions than there are answers as to what can and cannot be worn inside polling stations. Where does common sense come into the equation? What other items could be banned? Where does the Court (and the State) draw the line? Given the wide-ranging questions and concerns expressed by the Supreme Court, the answer may be a surprise when they hand down a decision.