The Future of Net Neutrality Under the Trump Administration

While President Trump has outlined his plans for strengthening the nation’s cyber security, his stances on privacy and net neutrality are unclear.

However, his newly appointed FCC chair, Ajit Pai, has a consistent track record and is expected to oppose an open internet.

In fact, on February 28th, Pai said net neutrality was “a mistake.”

President Trump’s love-hate relationship with technology
During the 2016 campaign, then candidate Donald Trump ran one of the most influential accounts in the history of Twitter. Rather than being a tool to supplement his message, he used the 140 character limit strategically to bypass the media, attack opponents, rally supporters and set the campaign narrative.

If the MSN was talking about Trump in an unfavorable light, an off-color tweet could change the conversation. If the public was being annoying over unreleased tax returns, he would reminded us that Crooked Hillary has unreleased emails. If there was a strong stance on an issue that he could flip, sure enough he would flop.

Hillary Clinton’s account had a small fraction of the following and frequently posted restrained messages that envisioned a future Trump presidency. Instead of having the “this can’t happen” effect, it actually served to normalize the idea. Trump fired from the hip, dominated headlines and ultimately prevailed.

On one hand, the president’s promises for his first 100 days make clear his desire to beef up the nation’s cyber infrastructure. These systems are technologically identical to the private sector’s, which can and have been compromised on a regular basis. The frequency of data leaks, including the DNC and John Podesta email incidents, shows not to assume a system is secure.

President Trump has spent his first weeks in office delivering exactly what he promised. Many of his campaign promises were heavy on rhetoric and light on detail. His appointee to chair the Federal Communications Commission (FCC) has more concrete plans: gutting its regulatory powers and forfeiting control of the internet by ending net neutrality.

Crosshairs on net neutrality
When Tom Wheeler became the chairman of the FCC in 2013, many pundits and analysts expressed concerns about putting a former lobbyist for wireless and cable industries in charge of regulating the telecom industry. “Last Week Tonight” host John Oliver claimed the appointment was the “equivalent of needing a babysitter and hiring a dingo.”

The FCC’s first question under Wheeler was whether to implement “fast lanes” on the internet, allowing companies to pay to have their service prioritized to customers. If Internet Service Providers (ISPs) could prioritize traffic from companies that could afford it, then other sites would fall into a “slow lane.” This would give ISPs full authority over prioritizing what content internet users could access easily and what they could not. The political and social implications of handing control of the flow of information to a few large, for-profit companies were seen as chilling by advocates of a free and open internet.

Wheeler called for comments on the issue. Over 100 companies signed a letter in support of an open internet. The FCC received almost four million comments, the most in the commission’s history. On February 26, 2015, the FCC voted to apply Title II of the Communications Act of 1934 to the internet, changing the classification of internet content from information to telecommunications. Title II states that covered entities cannot “make any unjust or unreasonable discrimination in charges, practices, classifications, regulations, facilities, or services.” Making ISPs covered entities gives the FCC permission to regulate the internet and to create rules that prohibit individual companies from controlling access to information — in effect discriminating against those who cannot afford to pay higher prices.

The Open Internet Order was seen as a monumental win by many businesses and individuals. It protects the ability to access the internet equally and fairly without additional costs. The internet is no longer a series of tubes filled with cat videos. It is essential to the modern economy, it allows dissent to be heard and it has become the gateway by which societies’ connected lives thrive.

Many supporters of net neutrality believe that creating internet fast lanes amounts to a form of extortion, forcing businesses to pay or be throttled. Large companies like Netflix or Google could afford it, but any small business or startup that could not pay the toll would bear the unfair burden of slow connections. Many ISPs offer their own streaming services, and the rule prevents them from deteriorating the quality of their competitors’ connections.

The cable industry has spent significantly in an attempt to prevent and appeal any form of internet regulation. ISPs did not back down when net neutrality passed. Instead, they rolled out data caps, a classic move from the mobile carrier playbook. Comcast, the nation’s largest ISP, started consumer trials, allowing for 300GB a month and charging for any data use over that amount. The FCC continues to receive complaints in the tens of thousands against these practices.

Internet service providers for their part claim that net neutrality is the most anti-consumer, anti-free speech and anti-innovation policy to ever exist. And they have not stopped lobbying to have the rules changed. Service providers have been aggressive in their attempts to take back the internet, and the new FCC chairman might just hand it to them.

The new sheriff in town 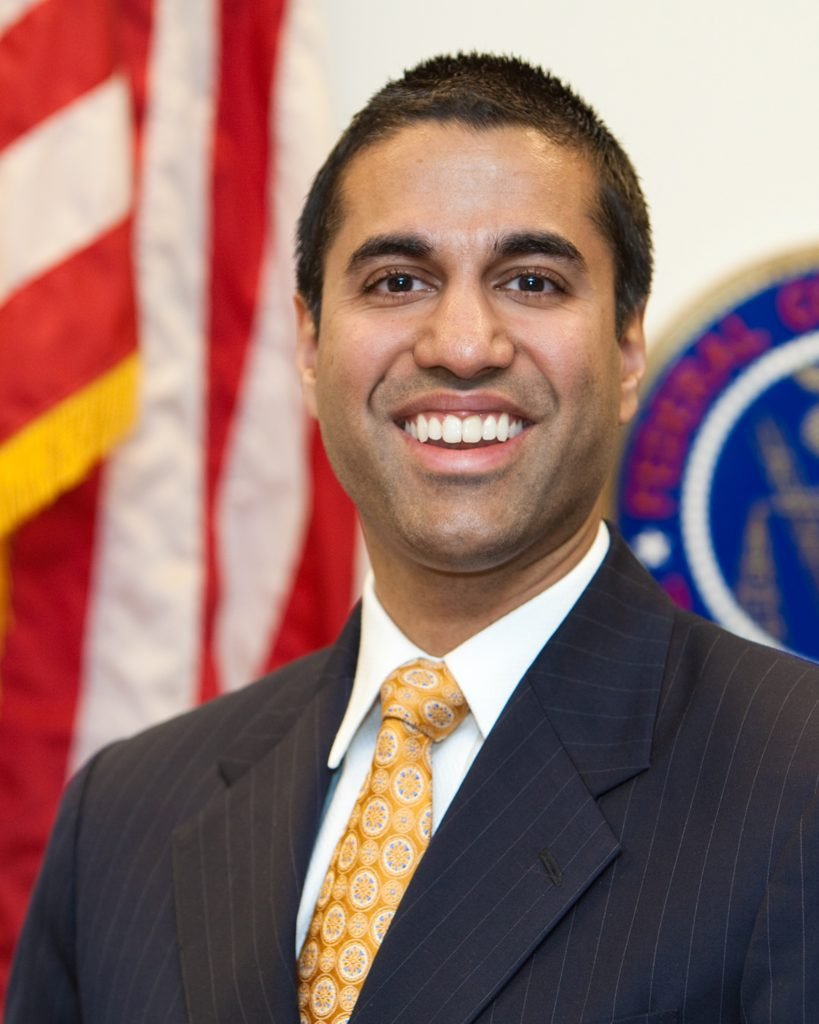 Ajit Pai was selected by President Trump to serve as chairman of the FCC. The appointment of FCC chair does not require Senate approval, and Pai stepped quickly into the position. Prior to this appointment, Pai spent two years as Associate General Counsel for Verizon and then almost a decade serving in various capacities within the Federal Government until joining the FCC staff as Counsel in 2007.

Former president Barack Obama appointed Pai to serve on the FCC in 2012, following a tradition of filling empty seats with the minority party, and he was unanimously confirmed. Through his entire tenure, he was a vocal opponent of Open Internet rules. Before the FCC’s 2015 vote, he argued against net neutrality frequently and publicly. Pai’s views opposing net neutrality were controversial. As the issue gained notoriety pending the commission’s vote in early 2015, protesters attended his press conferences calling on him to “Represent the people!” rather than representing telecoms.

In his prior service at the FCC, Pai made it clear he has an agenda and will not waste time implementing it. He has already shelved a plan that would allow consumers to purchase their own set-top cable boxes instead of leasing them from the cable company. Customers spend an average of $231 a year to rent these boxes, even long after the cost of the unit been paid off.

Pai’s plans include reversing the Title II rule applying to ISPs, effectively killing net neutrality. ISPs, anticipating new rules, have begun offering customers something called zero-rating, a practice by which companies like Verizon and Comcast offer their customers access to their own respective streaming services without counting against customers’ data limits, essentially making their own content cheaper in terms of broadband usage.

In his first week as FCC chair, Pai dropped all inquiries into claims that the practice of zero-rating unfairly discriminates — marginalizing some internet content — because, “These free-data plans have proven to be popular among consumers.”

Americans in rural areas have limited or non-existent broadband connections, which is creating a growing digital divide. Pai has been a strong supporter of bridging that gap, suggesting infrastructure development could be encouraged with tax breaks and reduced regulation. While the need to bridge the gap is real, Pai’s means of doing so could directly benefit the major ISPs (Comcast, Verizon, AT&T, Time Warner Cable and CenturyLink) that have already divvied up the country and blocked or absorbed any competition.

It is no surprise that Pai is also against government involvement in mergers. While President Trump has said on numerous occasions that he opposes the Time Warner / AT&T merger, promoting Ajit Pai to chairman sends an entirely different message. Pai is a strong supporter of the newly minted AT&T + DirecTV entity buying up Charter Communications. His issues with the deal are only the stipulations imposed by the FCC, which include requirements that the companies must expand coverage to 12.5 million customer locations and not implement data caps or overage feeds for seven years.

Ajit Pai has allies in Congress who also support rolling back net neutrality protections. U.S. Rep. Marsha Blackburn (R-Tenn.) has filed the Internet Freedom Act, which would overturn current rules. She is a vocal opponent of the 2015 Open Internet order and has said that rolling back net neutrality rules will be a priority of the 155th Congress. Blackburn was recently picked to chair the U.S. House Energy Subcommittee on Communications and Technology.

Democrats for their part are presenting a united front against any changes to current net neutrality rules. Senator Ron Wyden (D-Ore.) has compared the upcoming battle to the act of pushing a rock up a hill, but still claimed that if people get involved at the grassroots level, as they did in 2014 and 2015, it is possible to stop a rewriting of the regulatory framework. Senator Ed Markey (D-Mass.) has claimed that if Congress or the FCC tries to roll back the rules, there will be a “political firestorm that will make the 4 million who communicated several years ago look like a minuscule number.”

To his credit, Pai does believe that the FCC’s current rule making process is too secretive. Much of the debate takes place behind closed doors and does not become public until items are being voted on. An upside to the appointment is that Pai hopes to publish discussions and meetings, giving the public a chance to be more informed on the commission’s decision making.

Americans have fewer choices, higher prices, and more data caps and limitations when compared to much of the developed world. Keeping net neutrality in place and the internet open with Pai as FCC chair and a Republican-led House and Senate will be a challenge. However, those opposing the administrations’ plans have thus far indicated their willingness to make their voices heard — loudly. Ajit Pai may find it more difficult to change the rules than he hopes. Polls have shown that over 80 percent of Americans — Republicans and Democrats — support net neutrality. The question remains whether enough people will make that opinion known before it is too late.

Arguments at a Glance

IN FAVOR OF NET NEUTRALITY: