The Massachusetts Superior Court ruled that a woman who was fired for testing positive for marijuana usage can sue her employer for handicap discrimination. Christina Barbuto, who had a doctor’s prescription for medical marijuana, which is legal in Massachusetts, was fired on her first day of work for testing positive for the drug. Barbuto alleged…

Barbuto alleged that she informed Advantage Sales and Marketing during interviews that she uses cannabis several nights a week to treat low appetite, a symptom of her Crohn’s disease. She explained that she followed her doctor’s orders to consume a low dosage before meals, but never consumed cannabis before or during work. She claims the hiring manager told her it would not be a problem. However, Barbuto was fired after failing the required pre-hire drug test.

In response, Barbuto filed a lawsuit against her employer, alleging handicap discrimination. The court ruled against the company, which alleged that she could not sue them for discrimination because marijuana possession remains illegal under federal law. However, Massachusetts Chief Justice Ralph Grant ruled that if a certified doctor determines that marijuana is the best treatment for an employee’s medical condition, an exception to the employer’s drug policy is a reasonable accommodation to make for that employee.

“Under federal law (and many state laws), an employer must provide a reasonable accommodation for any disabled employee as long as the accommodation does not present an undue hardship,” said San Francisco employment attorney Jason Erlich.

“By summarily terminating her employment after she tested positive for marijuana, the employer failed to engage in an interactive process with her and failed to discuss whether other equally effective medical alternatives might exist which did not conflict with the company’s drug policy,” Erlich said.

According to Barbuto’s attorneys, her win could set a precedent for employers and employees in Massachusetts, as well as other states where medical marijuana is legal. 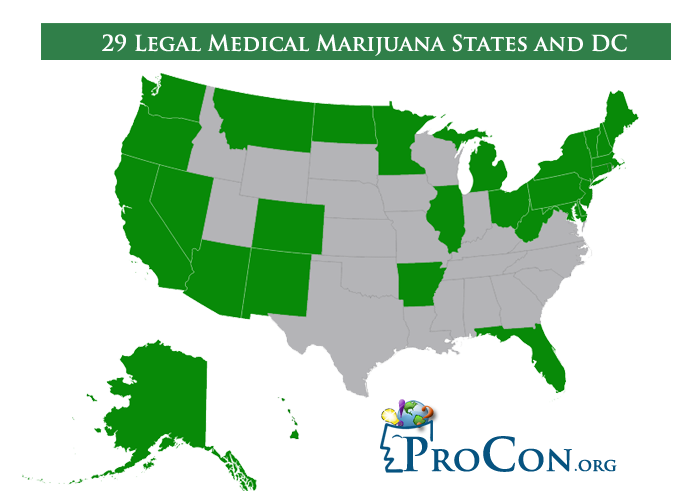 One issue raised by this case is the relationship between state and federal law on marijuana policy. Marijuana remains illegal under federal law as a schedule one drug, but several states have their own laws regarding marijuana use and distribution.

California was the first state to legalize medical marijuana in 1996 after the California medical community acknowledged that cannabis contains medical benefits that can treat many types of symptoms. Now, 29 states participate in the medical marijuana program, and 8 states and Washington D.C. have legalized recreational marijuana.

However, the way employers implement marijuana policy faces challenges and confusion as the relationship between state and federal laws are often contradictory. “These challenges and confusions exist due to the fact that marijuana remains completely illegal under federal law because it is a schedule one substance (ironically defined as drugs with no commonly accepted medical use with addictive potential). This means, based on federal law, no employee may legally use, possess or sell marijuana. On the other hand, depending on the state, marijuana is either highly regulated but legal for recreational use, or highly regulated but legal for medical use,” said Michigan criminal defense attorney Patrick Barone.

“Marijuana use, distribution and sale has been illegal under the federal government since the early 1970s,” said New Jersey attorney Daniel T. McKillop, who leads a team of attorneys assisting clients operating in the legal cannabis industry. “However, in 2013 former Deputy Attorney General James M. Cole issued a memorandum indicating that in states with robust marijuana regulatory programs that do not interfere with federal enforcement priorities, the Department of Justice may decline to dedicate federal resources to enforcing the prohibition."

According to McKillop, the Massachusetts ruling stands as a groundbreaking decision that could set a precedent for how similar cases involving employees using medical marijuana outside of work will be handled in court. However, cases like Barbuto’s will continue to arise as state and federal marijuana laws evolve.

As of March 31, 2017, 19 more states have bills pending that would legalize adult-use marijuana. Even on the federal level, lawmakers are trending toward opening up avenues for the decriminalization of the drug. On August 1, Sen. Cory Booker introduced legislation that would remove marijuana from the federal Controlled Substances Act, allowing states to set their own policies.

But until a marijuana rescheduling occurs at the federal level, private marijuana usage will continue to be a contentious and evolving issue for employers and private citizens alike. “This is still a very fluid area of employment law, and employers need to consult with a knowledgeable attorney to avoid litigation issues and stay abreast of state and federal law while implementing employment policies,” McKillop said.